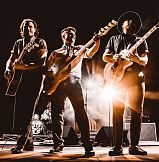 Johnny has always been a creative person and likes taking on new challenges! From his own solo work to his side project "SideCar" it now brings him to his newest collaboration with Texas Soul Band "Prophets and Outlaws". In 2018 Johnny played an acoustic show with lead singer Matt Boggs and guitarist Stevn Guckenheimer in Ardmore Ok. "Boggs" mentioned to Johnny that in 2019 there current bass player was leaving the group to persue other endeavors, which struck up a conversation about how johnny played bass in his "SideCar" project. Fast forward a few weeks, PAO had johnny come auditon for the spot as their bassist. The fit was great for Johnny and PAO as both have very similar tastes in music! Johnny will still be performing shows on his own with his band as well as performing with PAO! In 2019 PAO debuted their first full length album titled "Dreamer" check out Prophetsandoutlaws.com to find tour dates and all music.

Johnny also has plans to start working on a new album of his own in 2020. find all updates on the new project through socials or right here at Johnnycooper.com